Why are Infiniti G35 Coupe Tires so Loud?

I remember the day I went to my local Infiniti dealer to
test drive the brand new 2003 G35 Coupe. The dealer’s demo
car was a bright-red 6-speed manual coupe with the Brembo brakes.
The salesman was a young guy, probably in his mid-twenties, and he came along for the ride.

I was having a great time driving the demo car and I even managed
to activate the traction control a couple of times, so when the
salesman asked me to pull over I figured that he wasn’t happy with
how hard I’d been pushing the car and that he wanted to nurse it back
to dealership. Instead, he drove us to a quiet industrial zone
(it was a Saturday) and proceeded to do a couple of donuts in a parking lot.

We were approaching a 3-way T-intersection when he decided to floor it.
I assumed that I was about to get a demonstration of the stopping power
of the Brembo brakes. As we accelerated towards the stop sign, we passed
the point that I would have needed to start braking in my current
automobile (a lowly base-model VW Golf), but the salesmen didn’t let up.
Another second or two passed before I began to panic; I figured that
we were going to blow past the stop sign and smash through the front
window of the store on the far side of the intersection.

Just after I had tightened my seat belt, the salesman slammed on the brakes.
The tires gripped so hard that my butt lifted off the seat and all my weight
was suspended in my seatbelt. We came to a rest at least 10 feet before the stop sign.

It didn’t matter how much they cost, I just had to have those brakes!

Be Careful What You Wish For… You Just Might Get It

Many people (myself included) have mused that they want
a “race car”, but that’s not what they really want.
Real race cars are cramped, noisy, and hot. A real race car doesn’t
have any sound proofing, or any rubber in the suspension, or air conditioning.

I’m sure that when Infiniti designed the G35 Coupe, they made decisions to
cater to dreamers like me who thought that they wanted a race car, at least on paper.

To get the Brembo brakes you needed to order the G35 Coupe with the Sport Package
that included, among other things, upgraded 18″ rims. On the 18″ rims
were mounted Michelin Pilot Sport tires with a sidewall aspect ratio of 45.
The aspect ratio is so low that on many occasions other people have tried to
warn me that “your tires are flat”. The Michelin Pilot Sport is a pure
summer-only tire, and is close to being rated an R-compound racing tire.

If you drive behind a G35 Coupe in traffic, it’s easy to see that the
tires – particularly the rear tires – do not sit flat on the ground.
They have a small camber angle to them, resulting in a duck-like stance.
When the car goes around a corner, it rolls to the outside of the turn.
Incorporating a few degrees of camber in the suspension design allows the
tire to sit flat in the middle of a corner, giving it better cornering grip. 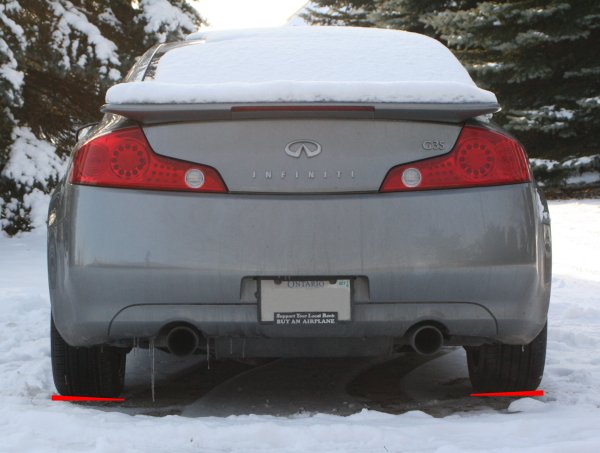 The problem, of course, is that 99% of my driving takes place on the highway,
where I’m travelling in a straight line. This causes the tires to wear unevenly.
Since the inside portion of the tread is taking more of the weight of the car,
it tends to wear much faster than the outside portion.

Below is a photo of a Michelin Pilot Sport tire that I removed from the front wheel of my
car after only 40,000 km (about 25,000 miles). You can clearly see that the inside
tread is more worn than the outside. 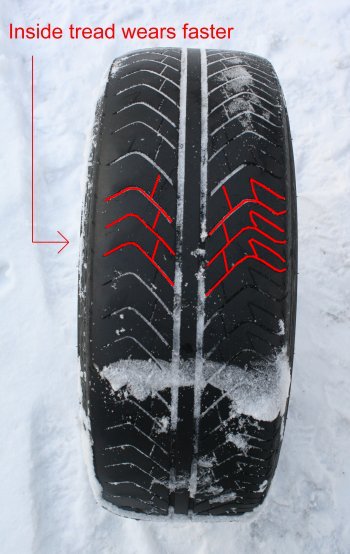 Below is another view of the same tire. You can see that the far edge of the tire
is no longer a nice smooth circular space. Instead it looks like a bunch of straight
edges connected to form a circular-ish shape. Perhaps it has become
a “tricontagon” (a 30 sided shape). 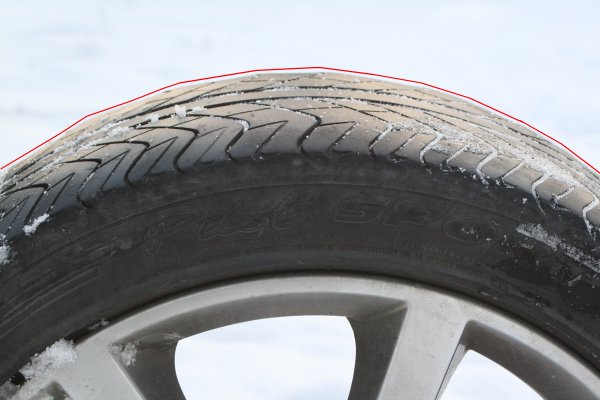 The first symptom of this uneven wear is NOISE. I mean LOTS OF NOISE. As I drive there
are certain resonant speeds (40 km, 100 km) where the worn tires emit an
annoying “VaVaVaVaVaVa” noise. Sometimes the noise is so strong that I
think that my cell phone is vibrating in my pocket and I attempt to answer the call!

Herculean braking and corning ability are quickly forgotten when you’re behind
the wheel of a car that is so loud that you can’t even think. Now imagine driving
for hundreds of hours of year in these conditions.

Exacerbating the problem is the fact that the front tires are a different size
than the rear, and Michelin Pilots are uni-directional tires; written on the sidewall
of the tire is an arrow pointing in the correct direction of rotation. This makes
it impossible to perform a standard tire rotation where you swap the rims from
front-to-rear and from side-to-side.

It is possible to dismount the tires from the rims and then re-mount the rubber
on the opposite side of the car, but obviously this requires special training and
tools and is more expensive than a standard rotation which an amateur mechanic
can perform in his own driveway.

A slightly over-inflated tire is much safer than a slightly under-inflated tire.
I used to keep the Michelin Sports inflated between 35 and 40 PSI, which actually
allowed me to achieve just under 30 MPG. However, the inner part of the tire
would wear quickly.

It might be my imagination, but after lowering the tire pressure to between 31
and 33 PSI I believe that the rate of uneven wear decreased. An additional benefit
was a softer, more comfortable ride. Be advised that driving on an under-inflated
tire is dangerous if you intend to drive at high speeds, or with a lot of weight
in the car, or on a rainy day.

The cruel irony is that, if I didn’t baby the car and drove more aggressively
around corners, the tires would wear more evenly and might even last longer.

The end result is that, at 116,000 km of use, I’m already on my third set of
rear tires and I’m about to put new tires on the front of the car.
To put this in perspective, on my last two vehicles I managed to get well
over 100,000 km out of the first set of tires.

Snow Tires on a G35C

The Michelin Pilot Sports are pure summer-only tires and are not to be driven
in the snow. The first year I had the car, I was at work one autumn day when
about 2 centimeters of snow fell. On my ride home the highway was clear, but
when I turned onto my side street there was still a thin sprinkling of snow.
I needed to drive up a small hill to get home, but it was hopeless. I couldn’t
get the car moving in first gear, even with the traction control turned off.
I left the car on the side of the road and walked the rest of the way home.
By the next day the weather had returned to above freezing temperatures
and everything was fine.

Normally, when you purchase snow tires and new rims, you’ll go down one rim size.
Unfortunately, except for a few lightweight racing spec models, nobody
makes a 17″ rim for the G35 Coupe that will provide sufficient clearance
for the massive Brembo brake calipers. (Note: I have since
found an affordable 17″ rim that will clear the Brembo brakes)

That same first winter I had the car I inquired how much it would cost to
get 18″ rims and proper snow tires. I don’t remember the exact price I was quoted,
but I do remember being shocked that it was going to be many thousands of dollars.
It was literally cheaper for me to purchase a winter beater car and park the Infiniti
in the garage.

After 4 years the engine in the winter car spun a bearing, but I decided that
it would be fun to fix it myself. Not just fix it, but improve it… with ported
and polished intake ports, a mild camshaft upgrade, lightweight underdrive
pulleys, and a limited slip differential.

You can guess what happened next. I didn’t mange to finish everything
before the snow started falling, and now I’m forced to drive the
Infiniti for at least one winter.

This year (2008) the province of Quebec passed a law making it mandatory
for drivers to mount winter tires on their car. This, predictably, resulted
in a shortage of winter tires for the rest of the Canada.

After the first snowfall, I visited my local tire shop and found a line-up
of people trying to get winter tires. An exasperated salesman was trying
to explain to some of the customers that he couldn’t get them the exact
model tire they needed at any cost, regardless of how long they were
willing to wait.

Once it was my turn I explained that I would be willing to take all season tires
instead of pure winter tires, and that I was looking for something that would
be soft, quiet, and comfortable. With little thought he recommended the
Michelin Pilot HX MXM4 tires, which was funny because I had just done some
quick online research and I had been looking at the exact same tires.

The HX MXM4 tires are marketed as All-Season Grand Touring tires, which I’m sure
is a fancy way of saying that they’re soft and quiet, despite having a short
45-series sidewall.

The rear tires on the G35C are 20mm wider than the front tires. You’d think this
wouldn’t make a big difference in the price, but you’d be wrong. The rear tires
cost $100 more than the fronts. In fact, in the salesman’s manual, the
P245/45R18 was listed as an “Infiniti tire”, so I have to
assume that this is a special low-volume application.

Below is a photo I took of the new HX MXM4 tires just after I had mounted the
rims on the car. I’m hoping that these will be much quieter than the Pilot
Sports they replace. I’ll give you a full report soon.

How are the stock rims so clean despite over 116,000 km of use? Manual labour,
my friends: Lots of cleaning and scrubbing and applying wax. I probably spent
6 or 7 hours total to make them look like this. I should mention that the
primary reason I wax the rims is to prevent the brake dust from sticking to
them, and not to look like a playa’.

I now have 40,000 km (25,000 miles) of use on the Michelin Pilot HX MXM4 tires.
I haven’t rotated them yet, but they
are still smooth and quiet with no visible feathering.

Do they have as much peak cornering and braking grip as the OEM Michelin Pilot Sport tires? No.

Are they fantastic snow and ice tires? No.

But for my needs – commuting to work year round on highways that are cleared of snow – they are
clearly superior to the original Michelin Pilot Sports. The Michelin Pilot HX MXM4 tires
fit my “mission profile” perfectly.

I was out at lunch one day with some co-workers when I noticed that there was a G35 Coupe parked
on King street that had Brembo brakes and 17″ rims with snow tires (this was
the middle of the summer, so I’m not sure why the owner was driving around with snow tires!).

A friend snapped the photo below with his iPhone.

After some investigation, I discovered that these are BSA 264 17″ rims, which were reportedly sold at many Canadian Infiniti dealers.

This site uses Akismet to reduce spam. Learn how your comment data is processed.