For 5 years and 115,000 km, the wife’s 2007 Nissan Versa SL has been very reliable. This winter, something finally broke: the heating and air conditioning fan would only work on the highest setting.

This failure is caused by a burn in the resistor pack. When the dial is turned to the highest setting, the fan’s power comes directly from the electrical bus. On lower settings, the electricity first passes through a series of resistors which limit the amount of current flowing to the fan, slowing it down.

Although I’m not thrilled that it broke, I’m glad that the HVAC system employs fault tolerant design and graceful degradation. Even if the resistor pack fries in the middle of a trip, the driver can still use the highest setting to keep the wind-shield free of frost and make it home safely, although we were boiling from all the heat and had to drive with our jackets off. 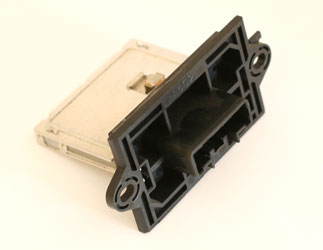 This is a photo of the offending resistor pack after I removed it from the car. As you can see, it is held in place by two screws, and has an electrical connector plug in the centre. This should be a piece of cake to replace, right?

The resistor pack is located in the centre console stack, just forward of where the driver’s right knee is. Unfortunately, gaining access to the resistor requires removing many other parts first.

The basic procedure is:

I’m an experienced “weekend mechanic”, and it still took me over two hours to complete this task.

Here are two shots of the broken resistor pack. On the left, you can see that the resistors are encased in a flat-plate aluminium heat-sink. On the right, with the plate removed, it’s easy to see where the circuit burnt. If this happens again, I’ll consider increasing the cooling capacity by using thermally conductive adhesive to glue an additional heat-sink to the aluminium plate in the vicinity of the burnt wire.

Due to the dangers inherit in messing with the brake pedal (and the gas pedal, which it is attached to it), I wouldn’t recommend trying this at home unless you are a very confident amateur mechanic. When in doubt, pay a professional.